Friday Morning at The Junction & Downtown Brooklyn: (Not So Much) Black Friday Shopping at the Triangle Junction & Atlantic Terminal Malls 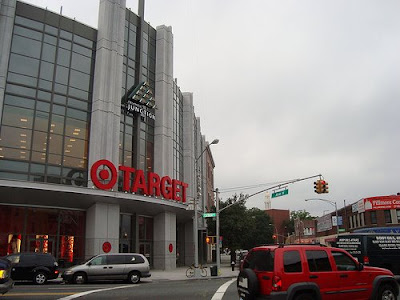 Getting to the Triangle Junction Mall at 8 a.m., this morning we saved hundreds of dollars on this day after Thanksgiving. A few hours later, we saved even more a few miles up Flatbush Avenue at the Atlantic Terminal Mall. How did we save this much money? We didn't buy anything on Black Friday, merely watched others doing so.

And from the look of things, this recession/ depression is severely crimping sales as strapped consumers behave more like us than they do normal people.

At 7:10 a.m. we caught a southbound B48 bus on our corner of Lorimer Street, took it through various enclaves of Williamsburg, Bed-Stuy and Crown Heights to Eastern Parkway, where we hopped on a 2 train to Flatbush Avenue/Brooklyn College.

As a pre-teen in the Kennedy administration, "going to the Junction" was a big treat for us, though it usually meant getting glazed donuts and comic books and window-shopping around what was the closest thing to a shopping area we could get to from Flatlands on the B41 bus.

By the end of the 1960s, we were jaded by our every-weekday trips as a student at Midwood High School and Brooklyn College, and these days we make the trip twice a week from Williamsburg to teach classes in creative writing and the short story, not to shop. 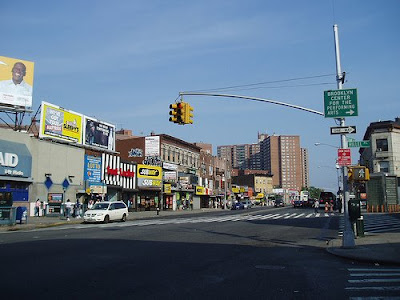 Passing a dozen or so Jehovah's Witnesses ladies at the train station, we made our way to the new Triangle Junction Mall between Nostrand and Flatbush Avenues on what used to be municipal and private parking lots where we kept our gold '73 Mercury Comet when we couldn't find a meter or a legal space anywhere else.

The mall's main store is Target, the fourth in Brooklyn, opened just last spring. Of course, the Circuit City in the same mall, which opened later, is already closing as that company, bankrupt, is forced to liquidate. Three people with big signs announcing the end of Circuit City, if not the world, are strategically placed on different corners, including in front of the elevator to the subway station.

Target usually opens when we get there at 8 a.m. but today it opened at 6 a.m. for the Black Friday rush. Except when we take the escalator up, the store looks pretty empty for such a big sales day. 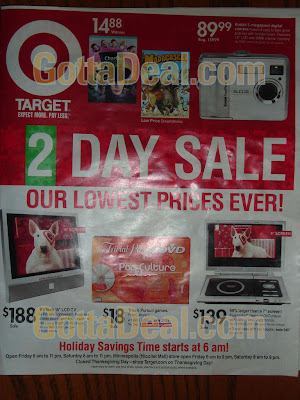 Where are the frantic mobs that traumatized us eight years ago - the only other time we went to a store on Black Friday - at the now-shuttered Mesa, Arizona, K Mart on Dobson and Broadway? We got to that store at 7 a.m. and were swept in with the huge crowd and found all the "doorbuster" bargains sold off before we came to them.

Today, at Target, it turned out there was no rush. Indeed, most of the big sale items will still be on sale on Saturday. There's almost no one at the checkout counters except a little Orthodox Jewish boy whose mom is buying an Elmo's World Record-and-Play Center and a Muslim lady in a head scarf with a huge box containing something called a "Storm Rocker" with some kind of wireless POD or something for $44. We looked at the boxes of it piled high and still aren't sure what it does.

There are a lot of other big boxes of stuff practically being given away that few people want, although we are tempted by a $29 Dirt Devil vacuum cleaner. The aisle to the escalator up is clear, and the Menswear section looks more like Ghosttown, with one young Caribbean-American couple and two gay teenage boys languidly looking at bargains they don't seem to be all that interested in.

Passing sales items we have no use for - stacks of $69 pink Disney Princess bikes and $79 blue Marvel Spider-Man bikes; a Hamilton Beach Classic Hand/Stand Mixer for $25, an 8-bottle wine cooler - we see the electronics section has more action. Electronic keyboards, wide-screen TVs, and other stuff are getting sold, but the crowds aren't nearly as large as we expected.

If we were seven years old, on our wish list would be one item on special sale at Target: the $19.99 Easy Bake Oven and Snack Center so we could, as the sign said, "Discover the excitement of REAL BAKING!"

But the first light-bulb-powered version of the Easy Bake Oven appeared when we were 12, too old for it. 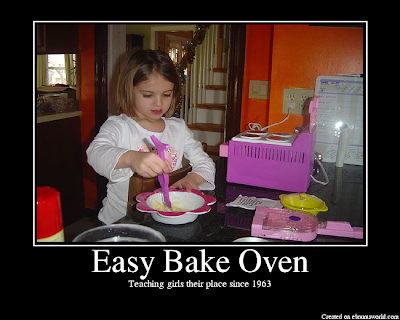 So for Xmas/Chanukah 1959 we had to settle for this huge realistic-looking car dashboard - which no doubt led at age 16 to our sneaking illegal drives around Mill Basin in our mom's fire-engine red Valiant and relying on girls to bake Alice B. Toklas brownies a couple of years later.

Circuit City was just sad. Most of the good stuff in the mammoth store is already gone, since those going-out-of-business signs have been around for weeks.

It reminds us of the sad day in the summer of 1997, when we we were traveling from Manhasset to Williamsburg when we stopped off at Main Street in Flushing and got to experience the last day of the fabled five-and-dime Woolworth chain. (One of the main hangouts of the Sultans - the not-so-bad-boys gang, um, club - we belonged to circa "I Wanna Hold Your Hand" - was the Woolworth's at the strip shopping mall on Ralph Avenue near Flatlands Avenue.) That Flushing store looked forlorn, and so did everyone in it.

Ditto this doomed Circuit City, and seeing a pre-teen girl holding a give-it-away T-Pain CD and a videotape of the complete first season of One Tree Hill is truly depressing. 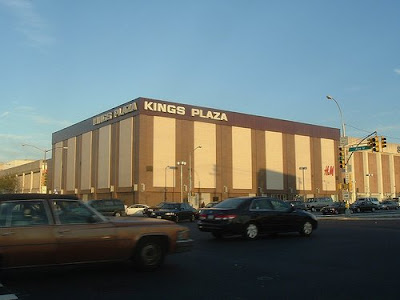 There were pretty long lines for the B41 bus going to Kings Plaza, the mall that opened in September 1970 three blocks from our old house - and where our dad and uncle had a store and where we often went with our college friends for lunches at Cooky's or The Crepe and the Pancake or to movies on Friday night and where we worked in Alexander's Department Store in the menswear department, near our friend Marilyn Citron at the cash register, as we kept straightening out the tables of puckery polyester pants and the racks of powder blue leisure suits. 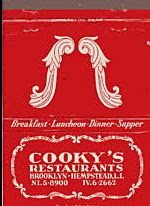 So perhaps New York City's first indoor shopping mall was busier. The B41 Flatbush Avenue bus - and the Q35, which stops across from Kings Plaza on its way to Rockaway - were too crowded for us to want to travel down that particular retail memory lane, so we opt for a road closer and less traveled by.

We retreat to the Hillel Place Starbucks - a long time ago the site of the legendary Campus Sugar Bowl greasy spoon where Andreas and the Cypriot Greek guys behind the counter would call us "Blondie Boy" when we ordered our chizburger and lime rickey. (Their lime rickeys were the best.) We read the day's Times, with a front-page article headlined "Retailers Offer Big Discounts, and Then Pray" and the big op-ed piece, "Dying of Consumption," saying:

There is a deeper, potentially positive, meaning to the decline in consumer spending: Americans are now moving back to more prudent income-based lifestyles.

We look across to the McDonald's and remember a group of us going there to try it the day it opened in 1971. Shocked to see Brooklyn College President John Kneller there, we asked him what he was doing with a double cheeseburger in his hands. "Why not?" the French scholar said. "It's nutritious and inexpensive." 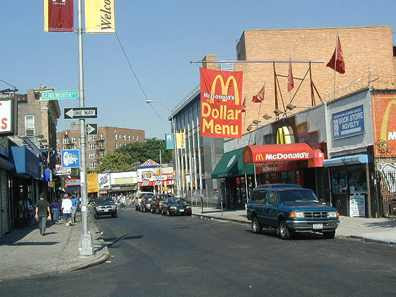 A few years later we'd go there regularly as an MFA student with our mentor, the BC fiction writing program director Jonathan Baumbach, who always spent less than we did because he had his Big Mac Attack Pack booklet of discount coupons - which, being legendarily cheap (yes, that part of Noah Baumbach's The Squid and the Whale is based on reality), he never shared with us, when we were earning the minimum wage of $2 an hour.

Going back to the Junction, we pass a bunch of stores replacing the long-gone places we loved: the Campus Corner restaurant, the Barron's and Barchas bookstores, the Campus Closet menswear store where our friend Brian McNeela worked and whose owner was a customer of our dad's Art Pants - and so we got this wonderful white wool crew-neck sweater with occasional colorful threads in the weave for almost nothing. Having our whole family in the garment business meant that we didn't buy retail until we were in our forties.

We take the 2 train to Franklin Avenue, spot a 4 and take it one stop to skip Eastern Parkway- Brooklyn Museum, Grand Army Plaza and Bergen Street, and get to Atlantic Avenue two minutes faster. The Atlantic Terminal mall is indeed crowded, and we go upstairs to check out the Target. 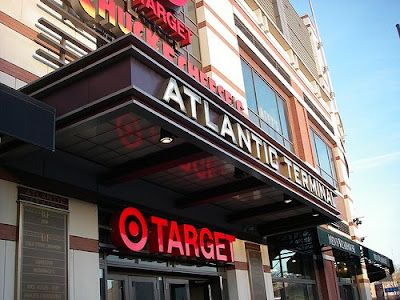 Reportedly the number-one store in sales in the entire Target chain, this one is more bustling than its sister at the Junction, but given the highly-trafficked, high-population area, it's not a Black Friday madhouse by any means. A few years ago, this would have been a typical Saturday afternoon.

At 11 a.m. now, we walk around and notice that not one of the 25 or so checkout counters has more than three people waiting to have their purchases rung up. A Target employee is directing those with fewer purchases to express lines on the Atlantic Avenue side of the store, but they don't seem much faster. It's all pretty quick. We've waited on longer lines here in the summer of 2006.

Anyway - did we tell you we hate shopping? - we left the busy-but-not-superbusy mall and walked our oft-trod route around the Williamsburg Savings Bank Building (One Hanson Place, for those who don't miss the dentists), BAM, and that little triangle park that no one seems to have to the key to, and entered the G train station at Fulton and Lafayette for our ride back to Williamsburg and the end of our Black Friday no-shopping free.

Total amount spent: $2.34 on the venti black iced tea at Starbucks. It would have been $2.60 but we have the new 10% discount card that Starbucks started giving out when it began closing its stores and losing customers due to the bad economy.

We're spending the rest of the day reading one of our favorite authors who tried to tried to sue us: E.L. Doctorow. Welcome to Hard Times.
Posted by Richard at 1:57 PM

When I was leaving for work, around 9am, I saw that there was a trail of cars waiting to get into Kings Plaza, like ants into a picnic, and there was too much pedestrian traffic for that early in the morning, so I assumed it was maybe kinda busy in there.

I run the Shakespeare & Co. across from where you used to enjoy lime rickeys (I was more a fan of their egg creams), and yeah, this neighborhood is the pits for holiday shopping. When the schools are closed, it's deadsville, plain and simple. I hope the Triangle Mall might change that, but I'm not too optimistic.

At least I order my classes' textbooks from your store.