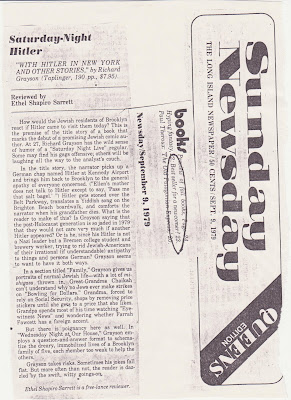 Today, Sunday, September 9, 1979, Long Island's Newsday reviews Richard Grayson's short story collection With Hitler in New York in Section C on page 23. The back cover of the paper has a teaser for the review: "Best Seller for a Newcomer?": 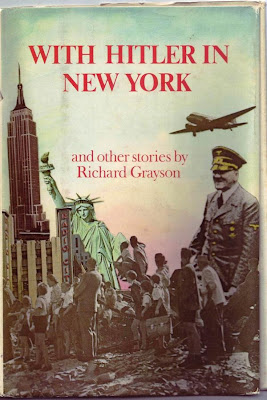 
"WITH HITLER IN NEW YORK AND OTHER STORIES," by Richard Grayson


How would the Jewish residents of Brooklyn react if Hitler came to visit them today? This is the premise of the title story of a book that marks the debut of a promising Jewish comic author. At 27, Richard Grayson has the wild sense of humor of a "Saturday Night Live" regular. Some may find his gags offensive; others will be laughing all the way to the analyst's couch.

In the title story, the narrator picks up a German chap named Hitler at Kennedy Airport and brings him back to Brooklyn to the general apathy of everyone concerned. ("Ellen's mother does not talk to Hitler except to say, 'Pass me the salt bagel.'") Hitler gets stoned over the Belt Parkway, translates a Yiddish song on the Brighton Beach boardwalk, and comforts the narrator when his grandfather dies. What is the reader to make of this? Is Grayson saying that the post-Holocaust generation is so jaded in 1979 that they would not care very much if another Hitler appeared? Or is he, since his Hitler is not a Nazi leader but a college student and brewery worker, trying to rid Jewish-Americans of their irrational (if understandable) antipathy to things and persons German? Grayson seems to want to have it both ways.

In the section titled "Family," Grayson gives us portraits of normal Jewish life – with a lot of mishigass thrown in. Great-Grandma Chaikah can't understand why no Jews ever make strikes on "Bowling for Dollars." Grandma, forced to rely on Social Security, shops for groceries by removing price stickers until she gets to a price that she likes. Grandpa spends most of his time watching "Eyewitness News " and wondering whether Farrah Fawcett has a foreign accent.

But there is poignancy here as well. In "Wednesday Night at Our House," Grayson employs a question-and-answer format to schematize the dreary, immobilized lives of a Brooklyn family of five, each member to weak to help the others.

Grayson takes risks. Sometimes his jokes fall flat. But more often than not, the reader is dazzled by the swift, witty goings-on.


Ethel Shapiro Sarrett is a free-lance reviewer.
Posted by Richard at 5:27 PM