Kirkus Discoveries reviews WHO WILL KISS THE PIG?: SEX STORIES FOR TEENS by Richard Grayson 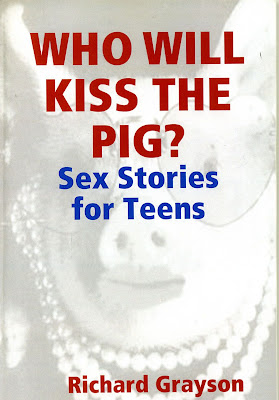 Kirkus Discoveries today posted its review of Richard Grayson's Who Will Kiss the Pig?: Sex Stories for Teens:

WHO WILL KISS THE PIG?: Sex Stories for Teens

A career-spanning compilation of fascinating short fiction and flash fiction from Grayson (And to Think that He Kissed Him on Lorimer Street, 2006, etc.), ranging from his first published story (1975’s “Rampant Burping”) to fresh work.

Rooted in post-modernism, Grayson’s economical writing style abets a natural gift for storytelling, and his tales are imbued with a comic touch—whether darkly so, or merely playful. In one example of the former, a caustic protagonist in “Those Seventies Stories” pretends to be one of a pair of twin brothers whenever he frequents area diners in order to alternately abuse and sympathize with a dull yet harmless local. The immediately preceding “The Life of Katz,” on the other hand, seems to be little more than an exercise in enumerating a litany of dog- and cat-related puns and idioms. This kind of nonchalance usually plays to Grayson’s strengths, but sometimes his tendency toward self-indulgence gets the better of him. A few stories find the author employing tics to mark his fiction as quirky—“An Appropriated Story,” for instance, uses the copyright symbol as a scene break—or using formal subversion to oversell his point, as in “Unobtrusive Methods, Inchoate Designs,” whose narrator breaks the fourth wall to deliver a brief, meta-fictional address on the nature of reality and perception that only renders the story frivolous. At his best, though, Grayson deftly explores the dilemmas of suspended youth—specifically the ache of the lovelorn, the search for purpose and the tendency to cling desperately to the familiar. To many of his characters, this means remaining perpetually in academia, earning advanced degrees while struggling to choose career paths or endlessly returning to camp as counselors late into their 20s (“Life with Libby”). In “Albertson’s Pulls Out of New Orleans,” an Idaho transplant to the Deep South is almost unreasonably obsessed with a local branch of his hometown supermarket chain, to the point of ineptly transferring his affections for the brand onto one of its cashiers.

The book is for sale at Amazon, Barnes & Noble, Books-a-Million and at places in other countries that should know better, like Blackwell (UK), Buecher (Germany), Ellipse Librairie (Switzerland), and Bokkilden (Norway).

Three decades ago, on May 1, 1979, Kirkus Reviews looked at our first story collection:

Grayson has little more to offer than a lot of youthful energy in this collection; he gives each of his story a good shove--but that's about it. Hitler, for example, arrives in Brooklyn to no great effect: "Ellen's mother doesn't talk to Hitler except to say 'Pass me that salt bagel.'"--and it's that one joke over and over. In Grayson's vignettes of normal Jewish family life, his autobiographical hand isn't shy to show himself, but he does nothing with the raw material. Other pieces fall into a flat, modish style: "Mara wants to go to the North sea. Helmut has too much work to do. Go alone, he tells her. But she wants to know how he will get up in the morning without her. Helmut sighs and says he can manage it. But Mara feels guilty and decides to stay home." There's the requisite self-conscious humor: a short story criticizes back its idle readers, a character named Placenta cries, "You're the narrator, you do something." What Grayson lacks most seems to be patience and follow-through; after offering an outrageous premise or a few jokes, he doesn't know what to do--so he merely repeats them. A bit of promise, then--but as a storytelling craftsman, Grayson has a long, long way to go.

Grayson's two story collections--With Hitler in New York (1979) and this new one--together suggest the literary equivalent of a kid's messy room: cozy for the kid, junk strewn everywhere, but a little horrifying to anyone standing at the doorway. Grayson's most constant character here is himself-as-writer: "Please: you can see I'm a sick person. What would it take, a few pages in your lousy literary magazine, to make me happy? . . . If I can't have your respect, I'll settle for your pity. . . ." And pitiful indeed are many of these stories--cheap, silly, little more than names, puns, and jokes about the author's desperation for readers (hence the title). Still, there is something boorishly, oddly charming about Grayson's ability to stop in the middle of some childishly junky piece to ask, sincerely: "When I write myself into a corner, as I have done once more, do you have to give me credit for trying?" And there are two real short stories here--"A Hard Woman," "What Guillain-Barre Syndrome Means to Me"--which, though sketchy, indicate that Grayson can be a writer when he wants. For the most part, however: juvenile literary clowning, only faintly--and erratically--amusing.

They ignored our next book, out the following year, and returned to us with a brief notice on February 1, 1996:

An underground post-modernist who writes comic fiction crammed with details adopted from pop culture and the daily news. "With the Pope in Park Slope" chronicles the relationship between a retired pontiff and his Brooklyn roommate, and "Twelve-Step Barbie" evokes a middle-aged, post- success Barbie trying to make it through a spirit-deadening day. The long title story, a resonant meditation on the themes of relationships, AIDS, and mortality, proves him capable of less self-conscious, more serious (though not less comic) work.

The dynamic Brooklyn cityscape serves as the backdrop in this beguiling collection of short stories.

Grayson’s tenth volume of fiction introduces a multicultural multitude of characters, including a teen lesbian from Uzbekistan who works as a Brooklyn Cyclones hot-dog mascot and a gay black student whose Pakistani roommate’s pet monkey helps him find acceptance on a mildly homophobic campus. Most, though, are slight variations on the quasi-autobiographical persona of a middle-aged white man reminiscing about the friends, families, lovers and locales that have populated his life. Grayson often constructs his loose, episodic narratives with a pop-culture scaffolding, as in “Seven Sitcoms,” in which the narrator meditates on his relationship with his family’s black housekeeper through a commentary on the racial and class stereotypes of early TV sitcoms; and “1001 Ways to Defeat Green Arrow,” a reconstruction of a love affair between a man and his much younger stepbrother, paired with a hilarious exegesis of a comic-book hero in decline. In other stories, like “Branch Libraries of Southeastern Brooklyn” and “The Lost Movie Theaters of Southeastern Brooklyn and Rockaway Beach,” the author maps out memories against the geography of his beloved Brooklyn, with excursions to Los Angeles and South Florida. Grayson’s low-key, conversational prose is injected with flashes of wry wit (“I live in a neighborhood where neighbors notice my lack of body art”), but some of the slighter pieces are no more than droll shaggy-dog stories. The more substantial ones, however, like “Conselyea Street,” about a gay man with a younger Japanese lover reflecting on his Williamsburg neighborhood’s demographic transitions—from Italian to Hispanic to hipster to yuppie—fuse vivid characters with a keen sense of place and cultural specificity.

An audacious and wickedly smart comedic writer brings his full weight to bear in a collection of his early work.

Grayson, no stranger to experimentation, here assembles four of his most engaging chapbooks, which merge nicely as an eclectic anthology of intriguing short stories. The author, who breaks nearly every literary rule in an obsessive effort to be unique, is both maddeningly and hilariously self-aware. “Narcissism and Me” leaps dizzyingly between the author’s presence and the actual story like a snake eating its tail, while “Sixteen Attempts to Justify My Existence” reads like a blog from another planet, and “I Saw Mommy Kissing Citicorp” waxes poetic on the rise and fall of 1980s greed. No business is safe, either, as Grayson mocks traditional publishing’s buzzed-based marketing with caustic sarcasm in “The Greatest Short Story That Absolutely Ever Was.” In “The Facts Are Always Friendly,” the action is narrated through a series of terse, date-stamped factual statements. Grayson opens up in the meatier “Eating at Arby’s,” a clever spoof written in childlike prose. It details the absurd dichotomies of South Florida as a pair of retirees fall prey to consumerism, political exiles and even gunplay on their way to the mall. With a keen eye for highlighting the high anxieties of the modern world, and many of the sensibilities of a sensitive urban writer, Grayson is occasionally compared to Woody Allen. But Grayson’s stories here recall no one so much as Richard Brautigan, who walked a similar line between wit and warmth in his more eccentric novels. Though certainly unconventional, Highly Irregular Stories are refreshing because of their aloofness, which allows the author to indulge his peculiar point of view.

An iconoclast sways to his own beat, making beautiful music along the way.

A witty campaign diary by a wannabe Congressman far too clever to ever be elected.

In the spring of 2004, Grayson announced (mainly to himself) his bid to unseat the firmly entrenched Republican incumbent in Florida’s fourth Congressional district. Grayson’s long-shot run was made even longer by a number of factors: First, a South Floridian, Grayson had neither the time nor the money to travel to the Florida fourth, located on the Georgia border. Second, unable to afford the $9,000 filing fee, he could only run as a write-in candidate. Third, he was a gay, pro-choice, anti-war, anti-death-penalty liberal running for office in the state’s most conservative district. These insurmountable challenges—and the biting humor with which Grayson faced them—led one sympathetic journalist to call him “every seasoned politician’s worst fear: a verbose, unknown, unrestrained, write-in mock-challenger.” Grayson chronicled his efforts as a “mock-challenger” in a series of postings on McSweeney’s Internet Tendency website, and here he collects these postings in a slim, delectable volume. The author’s wry deadpan punctuates almost every entry, and his commentary is equal parts funny, sad and true. He benefits as much from his own droll intelligence as from the fact that American politics seem to have devolved into a theatre of the absurd; some of the best laughs come from Grayson’s merely transcribing passages from election questionnaires, publicity packets and political journalism that he encounters during his “campaign.” Nonetheless, the critique of election politics that his run represents is as hilarious as it is completely legitimate; gerrymandering and the incredible advantages of incumbency have resulted in a system where challengers for U.S. House seats—both “mock” and real—are defeated the vast majority of the time. And after reading this, one is left with the sinking feeling that even a thousand Graysons might never change this broken system.