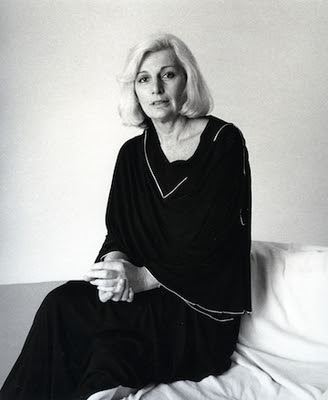 We are sorry to hear about the death of the brilliant novelist Iris Owens, who in After Claude (Farrar, Straus & Giroux, 1973) created a wonderfully lively voice and a book, given to us for our graduation from Brooklyn College, that we will always remember fondly.

As Eleanor Rackow Widmer wrote in her review in Arts in Society (Spring/Summer 1974):


The authenticity of [the protagonist] Harriet's character and her curious plight as a victim of cultural shock after a five year sojourn in Paris, strikes the reader as at least partially autobiographical. But to characterize After Claude as the inevitable lightly veiled autobiography of a "first" novel is to deny Ms. Owens her due both as a savagely accurate reporter of the current Greenwich Village-Chelsea Hotel scene, and as a gallow humorist of major order. It is not so much what happens in After Claude as the way it is said, with biting verve and accuracy for New Yorkese that Mary McCarthy and her reliance on "facts" would well envy.


In the May 27, 1973 issue of The New York Times Book Review, Leonard Michaels wrote:


After Claude is a very funny book saved from off-putting vulgarity by an exhilirating talent and intelligence. It is written with high-quality logical English, flexible enough to mimic the idiom of idiots, even to relax into triteness, without bringing the author's power of mind or feeling in doubt...


The antihero has been hanging around in fiction for quite a while, but the antiheroine is just now making her debut...it is impossible to exaggerate the importance of this discovery.

Miss Owens has created a new kind of monster for your compassion. And isn't that, after all, one of the classical functions of contemporary fiction?

Iris Owens made us laugh. A lot. She will be missed.
Posted by Richard at 5:31 PM

PLEASE CAN YOU HELP?
I am trying to find contact details of author, IRIS OWENS/HARRIET DAIMLER'S estate in order to get permission to re-release the original audio book of DARLING. Any help with ex-agent or anyone dealing with her affairs would be greatly appreciated.
Best regards, Freddie (freddie.rowe@googlemail.com)

my name is caroyn k balleisen. mymaiden name was carolyn s kimmelfield. Iris Klein was my classmate at lafayette high school. I greatly admired her.I was set to go to brooklyn college but she told me to apply to barnard which i did. I then went to columbia law school.inded my demographis mirrored that of sandra day oconnor. I lost conact with Iris but never forgot her. Ive had an interesting life and am writing a memoir. Do you have anything i can use. Ill be glad to talk to you about our friendship.

I wish I knew more about Iris Owens, but everything I know about her is here. I was just one of her many admiring readers and did not know, really, anything about her life other than what I could find out online. I wish I could help.