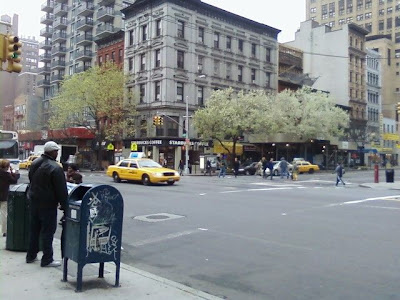 When we got off the M101 Limited bus this morning at Third and 23rd, we were struck by the spring beauty of the trees on the southwest corner. The tree on Third Avenue near the corner Starbucks has a little plaque on the ground in front of its trunk. 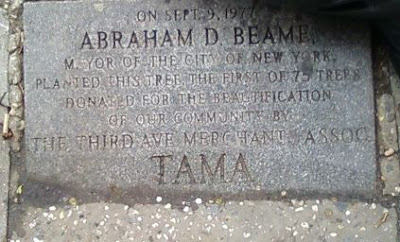 
On Sept. 9, 1977, Abraham D. Beame, mayor of the city of New York, planted this tree, the first of 75 trees donated for the beautification of our community by the Third Ave. Merchants Assn. (TAMA)

Mayor Beame couldn't have been too happy that day, a Friday. The previous day, Thursday, had been the Democratic primary (moved from Tuesday to avoid a conflict with Rosh Hashanah) and returns showed him coming in third, behind Ed Koch and Mario Cuomo, who'd advance to the runoff.

The city was coming off the "summer of Sam" when Son of Sam was shooting people and we'd had the disastrous 1977 blackout. We were writing our short stories, publishing them in little magazines, and about to begin the fall term teaching two sections of English at Long Island University, where we began working two and a half years before. This morning, about to teach our classes at SVA, we're grateful to the Third Avenue Merchants Association and Mayor Beame for the trees that brighten our day. 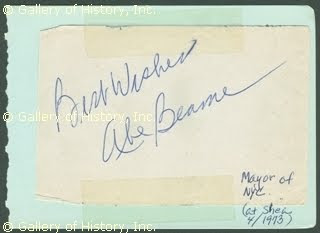