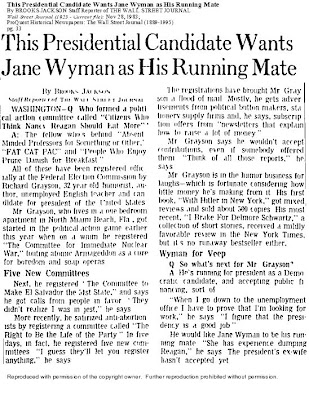 Today, Monday, November 28, 1983, The Wall Street Journal features a story on Richard Grayson as political activist and humorist on page 33, the first page of the second section:

By Brooks Jackson
Staff Reporter of THE WALL STREET JOURNAL

A: The fellow who’s behind “Absent-Minded Professors for Something or Other,” “FAT CAT PAC” and “People Who Enjoy Prune Danish for Breakfast.”

All of these have been registered officially at the Federal Election Commission by Richard Grayson, 32-year-old humorist, author, unemployed English teacher and candidate for President of the United States.

Mr. Grayson, who lives in a one-bedroom apartment in North Miami Beach, Fla., got started in the political game earlier this year when he registered "The Committee for Immediate Nuclear War," touting atomic Armageddon as a cure for boredom and soap operas.

Next, he registered "The Committee to Make El Salvador the 51st State," and says he got calls from people in favor.  "They didn't realize I was in jest," he says.

More recently, he satirized anti-abortionists by registering "The Right to Be the Life of the Party." In five days, in fact, he registered five new committees. “I guess they’ll let you register anything,” he says.

The registrations have brought Mr. Grayson a flood of mail. Mostly, he gets advertisements from political button makers, stationery-supply firms and, he says, subscription offers from “newsletter that explain how to raise a lot of money.”

Mr. Grayson says he wouldn't accept contributions, even if somebody offered them.  "Think of all the reports," he says.

Mr. Grayson is in the humor business for laughs--which is fortunate, considering how little money he's making from it.  His first book, "With Hitler in New York," got mixed reviews, and sold about 500 copies. His most recent, "I Brake for Delmore Schwartz," a collection of short stories, received a mildly favorable review from the New York Times, but it's no runaway bestseller either.

Q: So what’s next for Mr. Grayson?

A: He’s running for president as a Democratic candidate, and accepting public financing, sort of.

“When I go down to the unemployment office I have to prove that I’m looking for work,” he says. “I figure that the presidency is a good job.”

He would like Jane Wyman to be his running mate. “She has experience dumping Reagan,” he says. The president’s ex-wife hasn’t accepted yet.

Posted by Richard at 6:37 PM No comments: 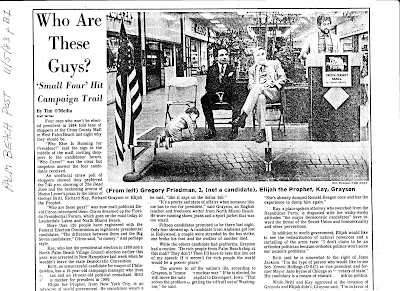 Four men who won’t be elected president in 1984 told tens of shoppers at the Cross County Mall in West Palm Beach last night why they should be.

“Who Else is Running for President?” said the sign in the middle of the mall, inviting shoppers to the candidates’ forum. “Who Cares?” was the clear but unspoken answer the four candidates received.

An unofficial straw poll of shoppers showed they preferred the 7:45 p.m. showing of The Dead Zone and the beckoning aroma of Mama Leone’s pizza to the ideas of George Britt, Richard Kay, Richard Grayson or Elijah the Prophet.

“Who are these guys?” was how mall publicist David Citron introduced them. Citron dreamed up the Florida Presidential Forum, which goes on the road today to Lauderdale Lakes and North Miami Beach.

“The difference between them and the Big Seven candidates,” Citron said, “is money.”

Kay, who lost the presidential election in 1980 and a North Palm Beach Village Council election earlier this year, was arrested in New Hampshire last week when he wouldn’t leave the state Democratic convention.

Britt, an unsuccessful candidate for mayor of Philadelphia, has a 15-year-old campaign manager in Texas. Britt ran his mother for president in 1980.

Elijah the Prophet, from New York City, is a self-styled visionary who has a day job with Western Electric and campaigns for world government headed by himself.

“It’s a pretty sad state of affairs when people like us have to run for president,” said Grayson, an English teacher and freelance writer from North Miami Beach. He wore running shoes, jeans and a sport jacket that was too small.

Fifteen candidates promised to be there last night. Only four showed up. A candidate from Alabama got lost in Hollywood, a couple were stranded by the bus strike, one broke his foot and the mother of another died.

While the other candidates had platforms, Grayson had a routine. "Do rich people from Palm Beach shop at this mall? They don't? Then I'll have to take this line out of my speech: If it weren't for rich people, the world would be a poorer place.

The answer to all the nation's ills, according to Grayson, is "immediate nuclear war." If he is elected, he will move the capital to Davenport, Iowa. "That solves the problem of getting the riffraff out of Washington," he said.

Posted by Richard at 5:44 PM No comments: