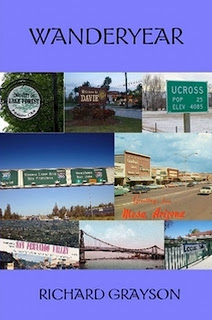 This week Superstition Mountain Press published Richard Grayson's Wanderyear. It is available in a 576-page trade paperback edition for $26.99, as well as an e-book published by Art Pants Company available at the Amazon Kindle store for 99 cents. 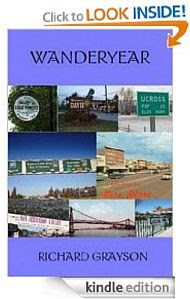 The promo stuff says in part:


Richard Grayson has been keeping a daily diary compulsively since the summer of 1969, when he was an 18-year-old agoraphobic about to venture out into the world -- or at least the world around him in Brooklyn. His diary, approximately 600 words a day without missing a day since August 1, 1969, now totals over 9 million words, rivaling the longest diaries ever written.

But Grayson is not merely an eccentric with graphomania. His nonfiction has appeared in PEOPLE, THE NEW YORK TIMES, THE ORLANDO SENTINEL, THE SAN JOSE MERCURY NEWS, THE ARIZONA REPUBLIC, THE NEW YORK POST and numerous other periodicals.

ROLLING STONE called Grayson’s first short story collection, WITH HITLER IN NEW YORK, published in 1979, “where avant-garde fiction goes when it becomes stand-up comedy,” and NEWSDAY said, “The reader is dazzled by the swift, witty goings-on.”

PUBLISHERS WEEKLY called Grayson’s THE SILICON VALLEY DIET (2000) “compulsively talky and engagingly disjunctive”; KIRKUS DISCOVERIES termed Grayson “an audacious and wickedly smart comedic writer” in its review of HIGHLY IRREGULAR STORIES (2005); and THE PHILADELPHIA INQUIRER, reviewing AND TO THINK THAT HE KISSED HIM ON LORIMER STREET (2006), said, “Grayson has a fresh, funny voice.”

The book is also available on Lulu and on Scribd for free online reading.
Posted by Richard at 12:20 PM No comments: