Book.of.the.Moment reviews Richard Grayson's AND TO THINK THAT HE KISSED HIM ON LORIMER STREET

On December 13, 2006, Book.of.the.Moment on MySpace reviewed Richard Grayson's And to Think That He Kissed Him on Lorimer Street: 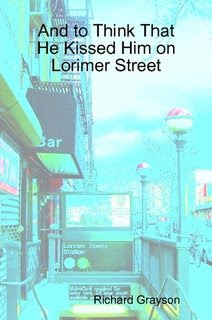 About Richard Grayson's collection: His sense of humor is unlike any I've encountered before, and he expresses his wit through his creation of a diverse group of characters. "And to Think That he Kissed Him on Lorimer Street" introduces characters such as a teenage lesbian from Uzbekistan, and a black gay college student who debates poisoning his Pakistani roommate's therapy monkey. Grayson skillfully expands on his memories of the past with a pop culture study of sorts..weaving his past memories into his observations and experiences in the here and now. All this is done with a wit that caused me to laugh out loud.
Posted by Richard at 6:24 PM No comments: 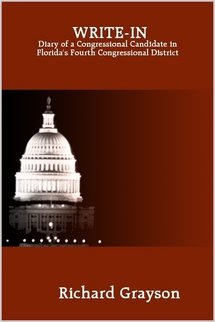 In 2004, Richard Grayson (author of With Hitler in New York and And To Think He Kissed Him on Lorimer Street) ran as a write-in Democratic candidate for the U.S. House of Representatives against a firmly entrenched Republican incumbent. His opponent, Republican Representative Ander Crenshaw, is almost abstract in his role as antagonist, having enough funding, support, and staff that defending his seat barely requires he even take notice of Grayson, who has no staff, no funding, and, at least, initially, no support. It's to Grayson's great credit that although he always knows what the outcome will be in his race for the House, he still puts an admirable amount of effort and time into reaching each potential supporter he comes across.

Grayson originally chronicled his race online for McSweeney's Internet Tendency (where you can still read the entire manuscript), and has republished his diary in book form. Here's an excerpt from the first entry from Grayson's book:

I'm the only registered Democrat in the race. But, unable to afford the nine-thousand-dollar filing fee to get the official party designation, I'm a write-in candidate. Under Florida's bizarre election laws, write-in votes count only if they're for "qualified" candidates like me.

If I weren't a candidate, Congressman Crenshaw's name wouldn't be on the November ballot. There just wouldn't be an election. Four of Florida's twenty-five House members were elected this afternoon when they did not get a primary or write-in opponent.

Over 90 percent of Americans live in congressional districts that are essentially one-party monopolies. Of Florida's twenty-five House seats, seven are safe for Democrats, and sixteen are safe for Republicans.

The Fourth is the most Republican district in the state. But I'm hoping to give anyone opposed to Crenshaw's positions a chance to vote for someone else.

In the last Congress, Crenshaw voted for more Bush tax cuts and the war in Iraq. He supported oil development in the Arctic National Wildlife Refuge, limiting the Patients' Bill of Rights, and banning "partial-birth" abortion. Crenshaw voted against campaign-finance reform.

Grayson writes with a self-deprecating wit and a keen eye for the realities of both our overall political situation and that of Florida's Fourth District, where his campaign takes place. Times move fast, and after the semi-uplifting Democratic victory this past November, it may be hard to remember exactly how bleak things felt for progressive or Democratic voters in late 2004, but Grayson's diary, written in the heat of the moment, manages to chronicle not only the desperate backdrop of that election but also the awakening sense of progressive community that was nearly destroyed by the spirit-crushing reelection of George W. Bush and his Congress. Grayson writes much like he ran for the House, in that he isn't so much trying to convert us as voters as much as he is trying to show us that we do still have options when he vote, despite what our political situation seems to allow.

When asked what he'll do to support traditional marriage, Grayson says he'll kill Liza Minelli. His favorite part of living in Florida's beautiful Fourth District? "The hurricanes." He tells the same reporter that he's "too lazy to be in Congress," because "it's a lot of work." Openly transgressive when answering reporters and filling out lobbyist group questionnaire, Grayson couches every answer in a wit that's as cynically sarcastic as it is big-hearted, leading to the confusion of his interviewers and friendly recognition on the part of this reader, whose contradictory feelings of cynicism and optimism from 2004 were both crushed and vindicated by the final results of that election.

Clocking in at just over one hundred pages, Grayson's Diary of a Congressional Candidate in Florida's Fourth Congressional District is a deceptively quick read. Still, it's bigger than it looks. I finished the book in a single evening, but have found myself returning to it to enjoy not only the absurdity of the political situations but also the fine humor of Grayson's prose and the sense of comradery that permeates every page. He so openly shares the details of his ironic, winking candidacy that it's impossible not to cheer him on. Towards the end, a voter writes Grayson a letter thanking him for trying that the voter signs "your constituent," a sentiment that I too felt by the time I turned the final page. Although Grayson lost the race, his book tells it like a victory march, celebrating every small triumph won against impossible odds.

I couldn't agree more.
Posted by Richard at 8:12 PM No comments: