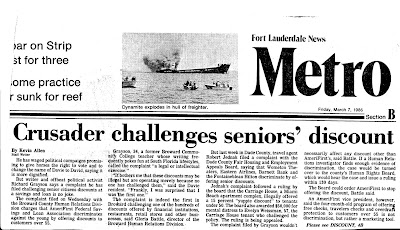 Text of other reports:

A droll writer of short stories launched the first attack Wednesday on thousands of discounts offered to Broward's senior citizens.

Richard Grayson, a Davie man who once ran for president on a platform of moving the U.S. capital to Davenport, Iowa, filed a complaint with Broward's human relations division against a thrift that he said discriminates against the young.

Grayson, 34, accused AmeriFirst Federal Savings & Loan Association of refusing to sign him up for free checking and a chance to win a free trip on Delta Air Lines because he is younger than 55.

Broward officials said they would soon notify AmeriFirst of the complaint and ask it to respond, the first step toward a formal ruling on whether senior-citizen discounts are legal.

"We are doing nothing that other banking institutions don't do," said AmeriFirst Vice President Bernard Lipskin. "It is common practice among financial institutions to target programs at specific segments of the market."

Grayson's complaint and a similar complaint filed in Dade County last week call into question the widespread practice of giving breaks on banking, bug exterminating and many other services to the elderly.

The complaints were filed after Dade County officials ruled that a Miami Beach apartment discount for young people was illegal.

After reading remarks by Broward officials to that effect in the newspaper Wednesday, Grayson marched to the Governmental Center to complain that AmeriFirst had turned him down the day before.

Grayson is no stranger to issues that attract the media.

His campaign for president two years ago included not just the pledge to move the capital to Iowa -- a blatant attempt, he admitted, to influence the caucuses there -- but a call for immediate nuclear war.

"If we don't have a nuclear war now," Grayson said at the time, "we might as well never have one."

Grayson does have a serious side. His books of short stories, some of them favorably reviewed, include Eating at Arby's -- The South Florida Stories.

He apparently is serious this time, pledging to pursue his case against AmeriFirst until age discrimination in South Florida is crushed.

"It would be offensive if they had special banking services for white people only," Grayson said Wednesday. "Under the law, age discrimination is as illegal as racial discrimination. I don't want these benefits when I'm 65. I think it will lead to younger people resenting me." 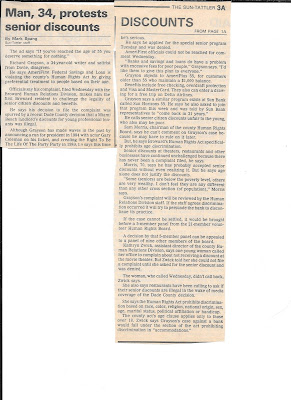 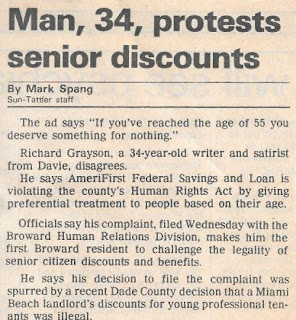 Richard Grayson, the Davie writer challenging discounts offered to senior citizens because they discriminate against the young, said he rejected an unusual settlement offer Tuesday that would have made him an "honorary senior citizen."

Grayson, 34, filed a complaint in early March with the Broward County human relations division against AmeriFirst Federal Savings & Loan Association, alleging AmeriFirst refused to give him free checking and a chance to win a free trip because he isn't 55 years old.

At a meeting at the division Tuesday, called to try and reach a compromise before a formal hearing, Grayson said that AmeriFirst representatives offered to enroll him in the plan that offers the free services and contests to customers 55 or older.

The offer was contingent on him keeping quiet about his special status, he said. "If I had taken the offer, I would have negated the point that I was trying to make in the first place," he said.

Lipskin has said the savings and loan association offers discounts to senior citizens to attract them as customers, a common practice among South Florida financial institutions.

Grayson's complaint and a similar one filed in Dade County are the first to question thousands of discounts offered senior citizens in South Florida.

Grayson, known for his run for the U.S. presidency two years ago on a platform promising to move the capitol out of Washington, D.C., to Davenport, Iowa, said he wants a ruling that would brand senior discounts discriminatory.

After compromise attempts fail, discrimination complaints typically are heard by Broward's Human Rights Board, which would decide whether the discounts are discriminatory. 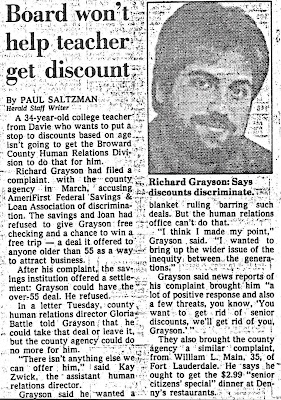 BOARD WON'T HELP TEACHER GET DISCOUNT

A 34-year-old college teacher from Davie who wants to put a stop to discounts based on age isn't going to get the Broward County Human Relations Division to do that for him.

Richard Grayson had filed a complaint with the county agency in March, accusing AmeriFirst Federal Savings & Loan Association of discrimination. The savings and loan had refused to give Grayson free checking and a chance to win a free trip -- a deal it offered to anyone older than 55 as a way to attract business.

After his complaint, the savings institution offered a settlement: Grayson could have the over-55 deal. He refused.

In a letter Tuesday, county human relations director Gloria Battle told Grayson that he could take that deal or leave it, but the county agency could do no more for him.

"There isn't anything else we can offer him," said Kay Zwick, the assistant human relations director.

Grayson said he wanted a blanket ruling barring such deals. But the human relations office can't do that.

"I think I made my point," Grayson said. "I wanted to bring up the wider issue of the inequity between the generations."

Grayson said news reports of his complaint brought him "a lot of positive response and also a few threats, you know, 'You want to get rid of senior discounts, we'll get rid of you, Grayson.' "

They also brought the county agency a similar complaint, from William L. Main, 35, of Fort Lauderdale. He says he ought to get the $2.99 "senior citizens' special" dinner at Denny's restaurants.

Illustration:photo: Richard Grayson
Posted by Richard at 8:38 PM No comments: