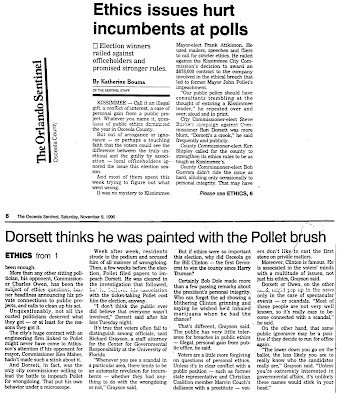 In the Orlando Sentinel today (Saturday, November 9, 1996) Richard Grayson is interviewed in a post-election article, "Ethics Issue Hurts Incumbents at Polls," about the vote in Osceola County, Florida.

It's true that voters often fail to distinguish among officials, according to Richard Grayson, a staff attorney at the Center for Governmental Responsibility at the University of Florida.

"Whenever you see a scandal in a particular area, there tends to be an automatic revulsion for incumbents -- whether they had anything to do with the wrongdoing or not," Grayson said.

But if ethics were so important this election, why did Osceola go for Bill Clinton -- the first Democrat to win the county since Harry Truman?

Voters are a little more forgiving on questions of personal ethics. Unless it's in clear conflict with a public position -- such as former state representative and Christian Coalition member Marvin Couch's dalliance with a prostitute -- voters don't like to cast the first stone on private matters.

Moreover, Clinton is famous. He is associated in voters' minds with a multitude of issues, not just his ethics, Grayson said.

[Kissimmee city commissioners] Dorsett and Owen, on the other hand, might pop up in the news only in the case of spectacular events -- or scandals. "Most of these people are not very well known, so it's really easy to become connected with a scandal," Grayson said.

On the other hand, that same public ignorance may be become a positive if they decide to run for office again.

"The lower down you go on the ballot, the less like you are to really know who the candidates are," Grayson said. "Unless you're extremely interested in governmental affairs, it's unlikely these names would stick in your head."

Posted by Richard at 6:25 PM No comments:

Florida Lawyer, the magazine of the University of Florida College of Law, has a feature on alumnus Richard Grayson in the Fall 1996 issue.
Posted by Richard at 1:02 PM No comments: 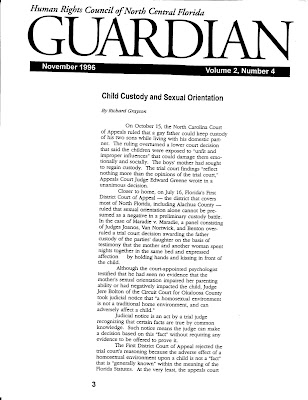 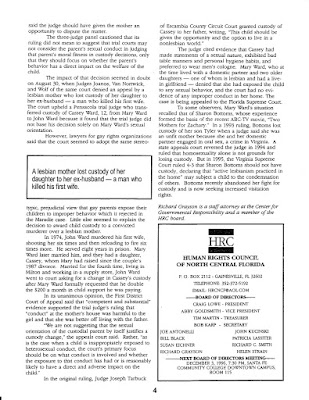