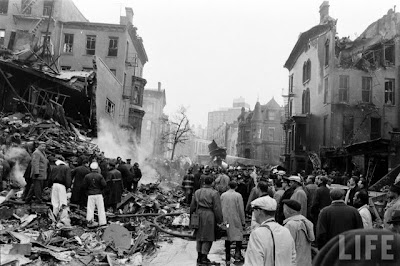 As lots of media reports have noted for the past week, today was the day, fifty years ago, that two planes collided in midair in New York City and one crashed right into the middle of Park Slope.

We have a clear memory of that day and have written about it in places, on the blog Syntax of Things but mostly in our story, "The Boy Who Fell to Brooklyn," which first appeared in the University of Miami literary magazine Mangrove in 2005 and then as the last story in the collection And To Think That He Kissed Him on Lorimer Street. 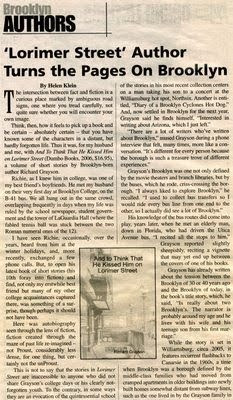 We reprint it here:

THE BOY WHO FELL TO BROOKLYN

In 1931, my grandmother was locked up in the psychiatric ward of Kings County Hospital for trying to strangle the obstetrician who would deliver me twenty years later.

Grandma Ethel always attributed her temporary insanity to all the blood she lost in the delivery of her only child, my mother. Apparently she tried to choke the doctor with his own necktie.

Jacob Levine didn’t hold a grudge. He knew it was because of her mental illness. She was only nineteen. Dr. Levine remained her doctor after she got well and became my mother’s after she came of age.

He delivered me at Beth-El Hospital in 1951 and four years later he performed my grandmother’s hysterectomy.

Dr. Levine was a thin man, always elegantly dressed. He had white hair and a mustache by the time I knew him. I never saw him without a vest.

When I was nine, my mother got pregnant again. When Mom was in her seventh month, on Friday, December 16, 1960, she fell down the stairs in our house in Flatlands. It was only six well-carpeted steps and she didn’t seem hurt, but still. Dr. Levine told her to come to his office at 50 Plaza Street, just off Grand Army Plaza.

When I got out of my fourth grade class at P.S. 203 for the day, my parents were waiting for me with the car. We were going to make sure Mom and the baby were all right. Freezing rain fell as we drove up Flatbush Avenue.

That morning, two planes had collided over New York Bay. One plane, bound for La Guardia, crashed in a vacant field in Staten Island. The other plane, a DC-8 jet trying to get to Idlewild, crashed into a church on the corner of Seventh Avenue and Sterling Place, just a few blocks from Dr. Levine’s office.

It looked as if the pilot had been trying to land in Prospect Park. If so, he fell about five hundred feet short.

It was the worst disaster in aviation history. One hundred and thirty-four people were killed, including four on the ground in Park Slope. By 4 p.m., the time we got to the area, the worst of the chaos was over.

Dad bought a New York Post at the newsstand at Grand Army Plaza as we walked to Dr. Levine’s office. It was an Extra edition, about the plane crash.

On the front page was a picture of a boy around my age, sitting dazed in a snowbank. His face was so blackened, I couldn’t tell if he was white or Negro.

Stephen was the only survivor from the two planes. A woman picked up the burned boy and drove him the thirteen blocks down Seventh Avenue to Methodist Hospital.

People were in and out of Dr. Levine’s waiting room as we sat there, all talking about the crash, describing the rain of metal and fire. Two women said the little boy’s survival was a miracle and they were going to a special Mass at their church to pray for him.

Park Slope was a decaying neighborhood back then. Storefronts on Seventh Avenue were boarded up, and the only supermarket, an old A & P, was the filthiest grocery store I’d ever been in.

Dr. Levine’s young associate, Dr. Sidney Silverman, examined Mom. She and the baby were going to be just fine, he said. Dr. Silverman told me maybe I’d have a little sister like he did. His sister Beverly was going to be an opera singer.

“Or you could have a little brother,” Dr. Silverman said. “As long as the baby is healthy, it doesn’t matter.”

The boy from the plane died the next morning. He’d been supposed to come from Chicago with the rest of his family for a Christmas visit, but he had a sore throat and so his trip was delayed. His parents and sisters were already in New York.

They said he must have been sitting on a stewardess’s lap in the jump seat, and the door must have opened somehow. That’s how Stephen fell from the sky.

At Methodist Hospital, they found four dimes and five nickels in his pocket and gave them to his parents. As they left the hospital the next morning, after Stephen was gone, his father put the coins in the collection box.

It was the snowiest winter I can remember. The schools were closed several times, including the day of John F. Kennedy’s inauguration, which I watched on TV. We stopped having winters like that years ago.

A light snow was falling eight weeks after the crash, the Friday Mom went into labor. She called Dr. Levine’s office and Dr. Silverman took the call. He told her if she could hold out till 8 p.m. before going to the hospital, they wouldn’t charge her for the extra day.

So we sat around my grandparents’ apartment in East Flatbush as darkness fell.

Always nervous, I asked Mom, “Are the pains really bad?”

She nodded and said, “Pretty bad.” But she was smiling.

I was worried because I knew my mother, like me, had an incredibly high pain threshold. (Our dentist, Dr. Hersh, liked us because we never took Novocain, no matter how deep our cavities that needed drilling. “Guts dentistry,” Dr. Hersh called it.)

I was afraid my new sibling was going to pop out then and there in Grandma Ethel’s kitchen, so I made sure that Dad drove Mom over to Beth-El Hospital. That way they’d be just outside in case she had to go in before 8 p.m.

Asleep in the Castro convertible in the living room that night, I dreamed I had a baby sister. But when I woke up, I saw that my grandfather had written on a piece of construction paper with a crayon, “IT’S A BOY!”

As long as it’s healthy, I thought.

After Dr. Levine died, Dr. Silverman moved his office to Kings Highway, closer to the part of Brooklyn where we lived. He remained Mom’s gynecologist for years. Except for the problems with her Dalkon Shield IUD, I never heard Mom complain about Dr. Silverman.

When I was in the MFA program at Brooklyn College, my girlfriend was a patient of Dr. Silverman’s, too.

I accompanied her to his office once when she had a yeast infection. In the waiting room, I introduced myself to Dr. Silverman as Marilyn Grayson’s son, and we shook hands. By that time, his sister, Beverly Sills, was very famous.

My friend Jerry was impressed when I told him about Dr. Silverman being the gynecologist of both my mother and my girlfriend.

When Jerry was in Sheepshead Bay High School, he once began an essay on the topic “My Favorite Place” with the sentence: “My favorite place is the vagina.”

But I never left Brooklyn.

My grandparents did, but just across Jamaica Bay for a beachfront co-op in Rockaway. Of course they’re dead now, but Grandma Ethel lived long enough to be helped by Prozac.

In the 1970s, my parents moved to Florida, and later, to Arizona. My brothers live out of state, too.

Dr. Sidney Silverman retired to Florida and died there in 1999.

Jerry had apartments near Brooklyn College, on Ocean Parkway, and then in Brooklyn Heights, but eventually he moved to Manhattan. He works a few blocks from ground zero.

He’s got a son now, too. When I see Jesse, I always greet him the same way: “Hey, homeboy.” I’ll keep doing it as long as the kid keeps smiling.

Park Slope has changed a lot, as I’m sure you know. I teach writing workshops in an elementary school not far from Dr. Levine’s old office on Plaza Street, not far from Seventh Avenue and Sterling Place.

The kids reacted in different ways to 9/11. One third-grade girl wrote these depressing stories about Eggy, a giant egg guy to whom terrible things kept happening. But by the end of the school year, there was a change. As she put it in one story, “One morning Eggy just perkered up.” That story was called “Eggy Goes to Hawaii.”

This final story is called “The Boy Who Fell to Brooklyn.”

In December 2000, a group of us who could remember the crash gathered at noon on Sterling Place and Seventh Avenue. It was the only memorial to mark the fortieth anniversary of the disaster, at a street corner where the sole reminder is a vacant lot amid rows of million-dollar brownstones.

The only official memorial to the collision is in the hospital chapel: a tiny plaque that includes Stephen's coins. Sometimes, after I get annoyed with the selection of books at the Barnes and Noble down the block – you won’t find this book there – I stop by to look at the plaque. 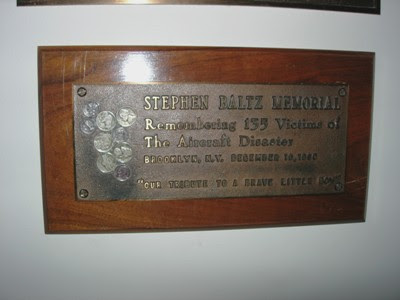 It says: “Our tribute to a brave little boy.”

Staring at the coins, I get lost in my thoughts and sometimes get depressed.

But eventually, walking along the streets of Park Slope, I perker up. 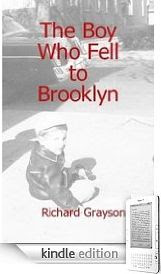 The story also appears as the title story in our 99-cent Amazon Kindle ebook, The Boy Who Fell to Brooklyn, a collection of nine stories published over the past four decades.

One of our favorite Times reporters, David W. Dunlap, today published an amazingly wonderful City Room blog post about Stephen's life.
Posted by Richard at 5:00 AM

Labels: 11215, 1960 Brooklyn plane crash, And to Think That He Kissed Him on Lorimer Street, Methodist Hospital, P.S. 203, Park Slope, plane crashes, Stephen Baltz, The Boy Who Fell to Brooklyn