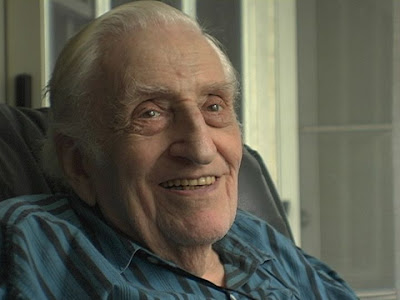 We had a nice time this morning at Dobson Ranch Park but felt sorrow upon reading there an obituary notice for the great poet and translator Edwin Honig, who was not only a first-rate writer but someone we liked and deeply admired from the time we met him at The MacDowell Colony in the summer of 1980.

Actually, we'd appreciated Edwin Honig's writing before that because we'd discovered his work in the late 1970s when it appeared in some of the little magazines we read (and sometimes appeared in ourselves). He was then the age we are now, and he'd had a long and productive career both behind him and still ahead of him.

We took walks and talked about growing up in Brooklyn -- Ed's mother was still living in Brownsville then -- and discussed literature and other subjects. He was working with another MacDowell fellow, the talented (and extremely nice) composer Anne LeBaron for whom he produced the text for Lamentation/Invocation, for baritone, clarinet, cello and harp.

Here is the full obituary by Richard C. Dujardin from the Providence Journal:

Edwin Honig, a poet, playwright and translator who taught at Brown University for a quarter century before retiring in 1983, died at his home on the East Side Wednesday after a lengthy battle with Alzheimer’s disease. He was 91.

Honig once told former Providence Journal columnist Wanda Howard that he was 13 when an alert teacher at the high school he was attending in Brooklyn, N.Y., introduced him to poetry, putting him under the influence of such writers as Hart Crane, T.S. Eliot, and Gerard Manley Hopkins. [Our note: it was Abraham Lincoln H.S., where his early poetry appeared in the 1935 literary magazine and year book.]

Thanks to his grandmother who spoke Spanish, Arabic and Yiddish but little English, he said, he also developed an intense lifelong interest in Spanish and Portuguese.

All together, he wrote 10 books of poetry, 3 plays, 5 books of criticism and 8 translations, one of the earliest of which was on Federico Garcia Lorca, the Spanish poet murdered by Franco’s fascists in Granada. It was published in 1944. Four decades, later he was knighted by the president of Portugal for helping to introduce Fernando Pessoa to the English-speaking world and was similarly honored in 1996 by the king of Spain for his translations of Spanish poets and playwrights.

Honig, who taught at Harvard University before going to Brown, received awards from the Guggenheim Foundation, the Mishkenot Sha’Ananim in Jerusalem, the National Endowment of the Arts and the Academy and Institute of Arts and Letters.

He would later compile nearly a half-century of his poems in a volume titled “Time and Again,” and was working on a second volume, “Over Time,” when he became ill.

In “To Restore a Dead Child,” he released decades of sorrow over the death of his 3-year-old brother who was run over by a truck when Honig was just 5.

“Honig has been a poet whose sorrow is always coming home ... No poet of our time has more fiercely presented man’s tragic mortality even as he finds an impressive variety of means by which that mortality is admitted and sublimed,” wrote Daniel Hughes in the Dictionary of Literary Biography.

He was the husband of the late Charlotte Gilchrest, who died of cancer in 1962, and the ex-spouse of Margot Dennes, from whom he was divorced. He is survived by a sister in Colorado, Lila Putnam, and by two sons, Daniel and Jeremy, and was cremated in a private service Thursday. Brown University said it plans a memorial service in Honig’s honor in the fall. 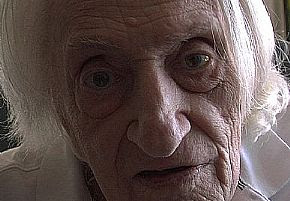 When we first met Edwin Honig, he was working on what would become the poem of his we treasure most. We reprint it here:

To Restore a Dead Child

1925
Sometimes while I sleep
I hear the single cry and tire screek
that never end.
My blond and foolish brown-eyed brother
lugging his fretful love
shambles after me
as the cunning Mack truck
lurching out of nowhere
cuts him down.

He's a long dead almost-three.
I'm a long lived five
just turned sixty-one
still running in a dead heat
with the rolling cab that swooped him up
heading for the vanished hospital.

It's then on waking
I feel the snot of infant faces
leak into my mouth.

Hearing it wake, we feel
the windy calling to each other
of the kindred sleep and death
in the morning opening
of the eyes of country horses,
the odor of earth's dampness
in the crystal tree light,
and the touch of rough bark
on fingertips.

Seeing it, we feel again
the worn heart welcoming
the slow envelopment of dark,
the falling off of sight
in the old gray house,
when sun's heat passes
and the first breeze
lifts a faint dust
along the hedges.

Remembering, again we see
the embers crumbling in the grate,
the fire flaring up again,
the pause before the turning shadow
spans the polished floor
and drifts into the open world,
a street that wanders
endless as a silent grief
that will never know itself.

We walked out of time
into the woods of pain
and never seemed
the same again.
We tilted with the hope
of finding ourself
in another skin,
and bent on recovering,
turned with open eyes
to find welcome in the arms
of a dead brother --
sleeping his dream of being,
a dream so long unfulfilled
there was no time
even to begin to live it,
till in his own hope
we lived what we believed
may have been
reserved for him.

Watching the immense self scattering ocean
ruffle out before us,
our wonder stirred and time became
an intricately formal mating,
night on day on night,
a repeated wave flash
signaling the act and its abating,
and the last long rolling into shore
turned into a fresh aspiring
of newborn creatures
to join the greater mating
sky and ocean,
and the creatures reeling beyond our wonder
mingled with the lifetimes
of our aged parents, each one apart,
our cheerful sister's pregnant daughter,
also apart,
and this briefly sunlit reawakening
stung alive the still unanswered
black and blueness
we never would be clear of --
though no longer cherishing
the old bruised core,
no longer poised against
the battering disablements,
we simply gazed again
and let our wonder live again,
and die.

For everyone the call of light,
seeing figures of the creatures
from the mountain and the sea:
an eagle flying and a snake
whipping past the chicken coop,
a horse neighing in a flash
of meadow, with wayward water there
to slake the thirst a moment.
As light descends,
following the slow shapes
bulking briefly in their place,
it makes as if to stop
and give them way and cause,
as if to stroke
and praise their substance fully
before each creature
passes into its own remove
with rapid smile print
(as on your face and mine appears
held there by heads soon to be
no longer yours or mine)
till it lets the shadow quicken,
overtake the bobbing bulks,
and rise immensely over
like a mercy to devour them.

As we would have it,
it would be nothing simple
or profound,
nothing easily attained,
long worked for or perfected.
It would be of a wholeness,
full and large and figured
in its substance.
It would be all engrossing
to itself and others --
like the playing of a mindless tune
between a richer music
and a silence:
a peaked and dribbling sound,
a sound wavering in descent
but kept in measure,
and in that measure
letting all know
how deeply it could love
the silence following.

Not to be listening
yet to be heard
in the huge inconsequences
of the heart,
where having conveyed
the full measure of our hate
as a gesture of belief
in something worse than ourself
is barely to have escaped
self murder,
the intended sacrifice
become the bound body of love
in a younger self --
wearing a brother's features
still scored through
the dead boy's memory --
forever jammed between
the tonnage of his death
and self hate's last convulsions,
like the lost deserter
fixed in an ice cake
some intruder yells up
early one spring.

As the light descended
the night was pierced a moment
and there was seen
in the vagueness of a shadow
a form more his
than our idea of him,
and the shadow wobbled
into a figure merging
with the hope of his lost being
come to be again,
as we tried swiftly to put on
the dark loose patches
fallen from him in the light --
trying to fill and fill
all that was left
of his living clothes
before his body vanished

No longer would he have to run
each time we left him
before our mindless going
struck him
as needing to be answered,
and the need make him
fly to us
and press his body
on us briefly.

For now, if again we left
without a smile or hand wave,
he would no longer need to fret
or wonder how to weight the meaning
since as last reminder
he had left
his body printed on us.

Here is a clip of this great poet in the 2010 film by his cousin Alan Berliner, Edwin Honig: A Poet's Alzheimer:

We will miss him and always treasure his work.
Posted by Richard at 4:32 PM

I studied with Edwin, and lost touch, but will never forget him for personal as well as poetic reasons. Thanks for keeping this online for us to stumble on, and if you'd ever like to trade Edwin stories - patriciaborns@gmail.com